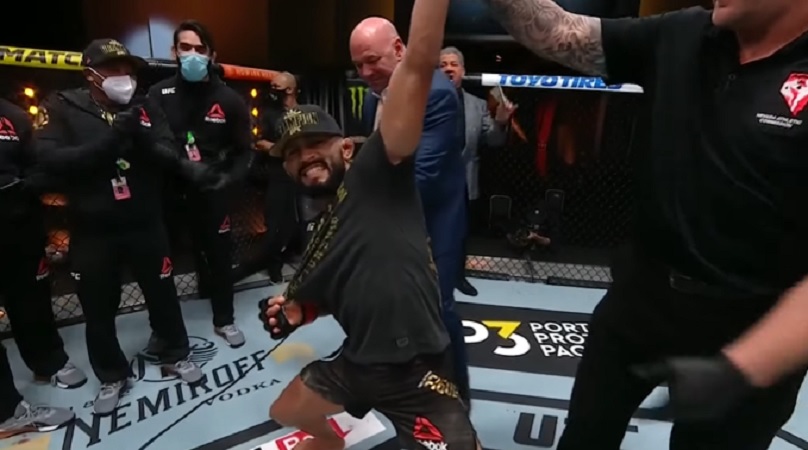 Victorious in the main event of UFC 255, last Saturday (21sy), in Las Vegas (USA), submitting Alex Perez with a guillotine choke in the first round, Deiveson Figueiredo, has already agreed his next challenge. According to ESPN, the Brazilian has a verbal agreement to defend his flyweight title against Brandon Moreno at UFC 256, scheduled to take place December 12th, also in Las Vegas. The card in question will be the last “numbered” event of the UFC of 2020.

After Deiveson’s victory over Alex Perez, less than two minutes after the UFC 255 main event, UFC president Dana White, said he hoped to keep the Brazilian in Las Vegas for a possible confrontation against Moreno. Moreno, who was also in action on last Saturday’s card, won with a victory in the first round by knocking out Brandon Royval. Apparently, the two fighters are happy with the possibility of the fight and are willing to face off on the 12th.

If the fight is, in fact, made official, Deiveson Figueiredo will become the first champion in UFC history to defend the title in consecutive months. He will have beaten Joseph Benavidez in February, and again in July – in a fight where he conquered the flyweight crown. He then overcame Alex Perez last Saturday and is expected to take action for the fourth time in 2020 against Moreno on the 12th. Deiveson probable opponent, Brandon Moreno comes from three victories in a row, two of them this year, over Jussier Formiga and Brandon Royval.

* Fight still to be officially confirmed by UFC