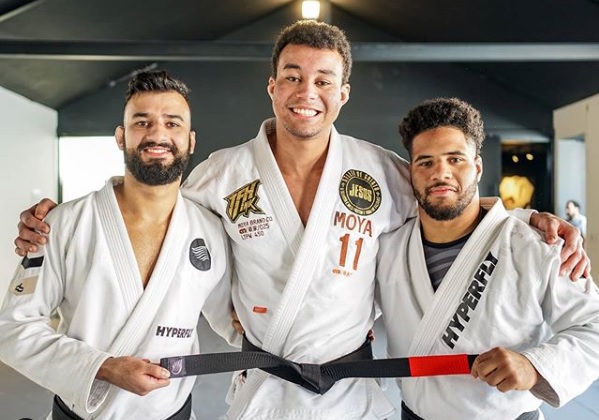 *A Multi-champion at many levels and colours of belts, Erich Munis is ready to take another important step in his Jiu-Jitsu career. On November 14, against Victor Hugo, in one of BJJ Stars 4 super fights, the young athlete – about to turn 23 – will make his debut as a black belt. This moment will be even more special, due to the fact that his brothers, Anderson and Alex, also having recently moved up belts.

A world champion at his weight category and absolute as a purple belt (2019), double gold at the Pan-American (2019), Brazilian and the  European (in 2019 as purple belt and in 2020 in brown belt), besides the titles in Abu Dhabi World Pro 2018 and the Grand Slams of Abu Dhabi and Los Angeles. With this vast curriculum, Erich Munis arrives at black belt packaged and ready to keep showing service at the highest level of the Jiu Jitsu art.

“My expectation in my debut as a black belt can be summed up in one word: happiness. I am grateful to God for this opportunity, even more in front of an athlete like Victor Hugo and in an event as grand as the BJJ Stars. I will seize this opportunity. I’ve been training hard for a long time, even before the pandemic. The pandemic itself did not influence my daily routine much, because everyone here lives on Jiu-Jitsu, everyone stays together, so it didn’t hinder us too much, we managed to maintain our training and now we are putting everything into practice ”, said the young man, who despite recognising the importance of his fight with Victor Hugo, stresses that his preparation is not directed to it being a tournament or a single fight.

“I have been preparing in the same way for all the championships that I’ve participated. For the Munis brothers, there is no focusing on a specific competition in itself, we train for our entire career. Not much has changed, we keep the same strategy and trained hard for every occasion that arises, so when the opportunity does arises, we are ready ”, said the representative of the Dream Art project, in São Paulo.

The global pandemic of the new coronavirus hindered the plans of most athletes, and with Erich Munis it was no different. Without championships until recently, the fighter kept his training up to date and, in addition to the expectation to take action at the BJJ Stars, he cited other competitions that he intends to compete soon, in case there is a release by the authorities for them to occur.

“My main goal is BJJ Stars, then the AJP Tour Grand Slam. I am also looking forward to the possibility of being present at the IBJJF World Cup, but things are still uncertain. Next year, I am targeting the Abu Dhabi World Pro, for sure, but it will depend on the situation around the world because of the pandemic, but my plan is to fight always ”, he concluded.

Ronaldo Jr and Malyjasiak dominate Boise Open; André Porfírio is #1 on the list of champions in Atlanta

After a long time of negotiations, André Galvão announces superfight at ADCC 2022