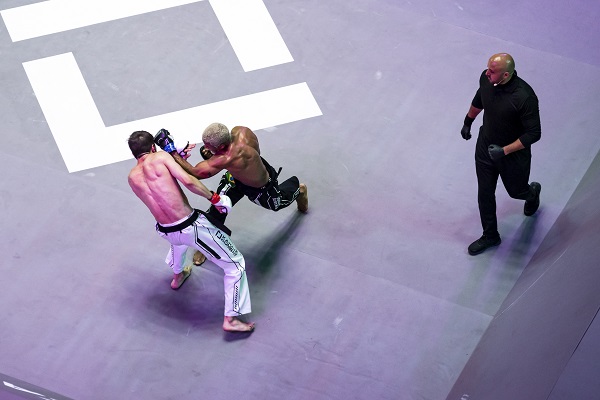 Featured with three of the four fighters in action, Brazil was the main protagonist of the ninth edition of the 2020 season of Karate Combat. The event took place last Sunday (22nd) in the “Neo Tokyo” scenario, one of the futuristic themes generated by computer graphics that is a registered trademarks for the promotion.

The main attraction of the night, was the first ever battle between Brazilians in the history of the franchise. Bruno Assis, beat Teeik Silva in the under-67kg category and continues undefeated, with three victories. Among the women, Ana Luiza da Silva was defeated by the Hungarian Melinda Fabian, in the under-64kg division.

The left-handed, Teeik Silva went straight forward and exchanged punches in an intense first minute. Eventually he was pushed towards one of the corners of the pit (arena), Bruno Assis countered with a cross, that sent the Silva to the canvas for an instant.

The technical exchanges were maintained in the second round. Silva followed with pressure, variations of crosses, hooks to the body and high kicks. Assis, on the other hand, started to move more and more, to soften his opponent’s aggressiveness.

In the final round, Assis controlled the distance better with kicks and managed to hold Silva’s leg, sending him to the ground. These advantages awarded, were sufficient to guarantee victory by unanimous decision in the hands of the judges.

“My opponent was experienced and very difficult to hit. He came up for a fight from the beginning and I had to change my strategy early on. But I was prepared for everything and got another excellent result ”, said Assis.

Facing an opponent with a larger reach, Ana Luiza started cautiously and with constant lateral movement to look for angles of attack. Melinda Fabian applied kicks to the leg followed by precise and direct shots, which shook the Brazilian until the end of the round.

The disadvantage made Ana return more aggressive in the second round, betting on straight strikes and a powerful right cross, which exploded on her opponent’s chin. The Hungarian took advantage of more combinations of kicks, takedowns and ground attacks (“ground and pound” is allowed for five seconds in the rules of Karate Combat).

In the final round, the offensive consistency and distance control again made the difference, and the European guaranteed the victory by unanimous decision in the hands of the judges.