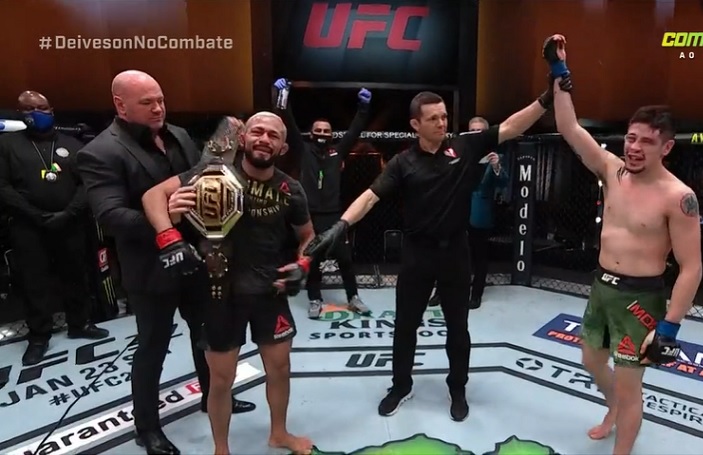 The UFC flyweight belt stays in Brazil. Fighting in the main event of UFC 256, this Saturday (12th), in Las Vegas (USA), Deiveson Figueiredo had the most complex challenge for the promotion so far, in a confrontation that could be considered the best of the year 2020. Faced against an inspired Brandon Moreno, the Brazilian fought for five-rounds that was very balanced action from both athletes. In the end, the judges decided for the majority draw, with the Brazilian keeping his belt.

With this draw, the “God of War” has breaks a UFC record, he is now the UFC champion to successfully defend his title in the shortest time (just 21 days) just three weeks since he defeated Alex Perez at UFC 255. Deiveson surpasses the mark that was held by Ronda Rousey (56 days). In the co-main event of the night, Charles Oliveira put on a dominant performance from start to finish, both in the standing and in grappling fight. He defeated Tony Ferguson by unanimous decision, winning his eighth consecutive victory and coming even closer to a title challenge at lightweight.

There were other Brazilians were in action and in an action-packed stand up fight, Mackenzie Dern overcame Virna Jandiroba unanimously, continuing her clear rise in the strawweight division. Before that, Ronaldo Jacaré, Junior Cigano and Renato Moicano were completely dominated and knocked out by Kevin Holland, Ciryl Gané and Rafael Fiziev, respectively.

Deiveson vs Moreno ends in a draw, with the Brazilian keeping the title

Deiveson Figueiredo in the first seconds, shortened the distance to Brandon Moreno to work his striking. The two fighters went to the ground in a brief moment, but the fight was back on the feet and the Brazilian, with his guard low and good head movement, hit a clean left hook, followed by a right jab. In the final stretch, the Brazilian increased his production and finished ahead in the first round. Deiveson began to work on kicks in the beginning of the second round, while the Mexican responded with good strikes from middle distance. Moreno then landed a takedown, but Figueiredo quickly got up and started striking again, he managed to find a home for some good punches and shook the challenger, who once again took the champion down before the end of the round.

The two fighters continued to be very active, going for powerful and precise strikes, with a slight advantage going to the Brazilian. Deiveson, however, had a point deduction, after low blow kick. When the fight resumed, the champion took the fight to the ground, but could not keep his position. In the fourth round, champion and challenger continued a high level stand up fight, so the Mexican took Figueiredo down, who showed good technique to get out of the position, but the Mexican connected great strikes and managed another takedown.

In the last round, both athletes went for a more studious approach, with few highlights. In the last few seconds, however, the Deiveson applied a takedown, which led to him winning the round. After five rounds of a confrontation, with a lot of action and balance, the Judes scored the fight a majority draw. With this result, Deiveson Figueiredo keeps his belt and successfully defends it for the second time.

As expected, Charles do Bronx and Tony Ferguson started the fight very actively, with precise strikes by both fighters. The Brazilian showed his strategy and took the fight on the ground, getting to mount without major difficulties. Oliveira applied his body weight, stabilized his position and landed great strikes with some good ground and pound. In the final seconds, Charles cought a beautiful armbar, but Ferguson was saved by the bell. In the second round, the Brazilian continued superior and it didn’t take long for him to get the fight to the ground. “El Cucuy” applied an illegal up kick, but the fight resumed in the same position and, the Chute Boxe athlete increased the pace landing punches and elbows from above, showing a clear dominance and control.

In the last round, Charles Oliveira put on, one more show and very easily, took down Tony Ferguson again. Putting on a show with his technique, the Brazilian got the mount again and with a beautiful transition, tried to finish with a triangle, which was well defended by the American. In the last minutes, aware of his advantage, Oliveira controlled the fight and after three rounds, won by unanimous decision, earning his eighth consecutive victory and approaching, once and for all, a title fight at lightweight.

Mackenzie Dern started the confrontation with a good sequence of strikes, which were well absorbed by Virna Jandiroba. The two fighters continued with striking, with Mackenzie betting on good combinations at short distance, while Virna found a home for some good right handed blows. Superior in the first round, Mackenzie remained the more active fighter in the fight, but at the same time, Jandiroba was very resistant and showing good head movement. In the final half of the round, Dern was bleeding profusely from the nose after a knee and the fight went to the ground, with Virna on top, but without connecting any effective strikes.

In the third and final round, Mackenzie Dern tried to take the fight to the ground in the first seconds, but the Virna defended well. With the fight back in the stand up, the multi-champion in Jiu-Jitsu applied a good sequence of strikes and finally, took the fight to the ground, but saw Jandiroba end on top again. In the final seconds, the fight was back to the feet and both started to hesitate, which ended with Jandiroba trying to finish an omoplata, without success. In the end, the judges declared Mackenzie the victor, unanimously. Dern adds a third win in a row and will certainly climb big steps in the strawweight division.

Without wasting time, Ronaldo Jacaré took the fight to the ground in the first seconds. Kevin Holland acted quickly and from below, applied a series of elbows and a triangle attempt, which avoided any treat of the Brazilian finishing the fight. The fight got back to the feet, but Jacaré took it to the ground again. On top, the Jiu-Jitsu black belt showed loopholes and the American hit two powerful right handed blows, which paved the way for a brutal and impressive sequence, winning by knockout in the first round. The result proves Holland’s here to stay, by scoring his fifth consecutive victory, while Jacaré was beaten for the third consecutive time.

Dos Santos is knocked out and loses fourth consecutive for UFC

Ciryl Gané went for a grappling fight from the first minutes, but Junior Dos Santos defended well and kept the fight standing, where the fighters exchanged strikes, however, without great effectiveness, despite a good moments from the Brazilian in the final stretch of the first round.

The Frenchman continued with kicks in the second round, while Dos Santos responded with right-wing blows. Already in the final half of the round, Gané hit a right-hand jab that shook the former champion, and followed it with an elbow – which subsequently generated complaints from the Brazilian, alleging an illegal strike. Junior Dos Santos went to ground and the referee was forced to interrupt the fight after two more strikes by the Frenchman. With that, Ciryl Gané won via technical knockout and remains undefeated in MMA, with seven victories, four for the UFC.

Moicano gets knocked out in controversial stoppage

Renato Moicano and Rafael Fiziev bet on low kicks for the start of their fight, with Fiziev looking more for low kicks and Moicano applying blows from middle distance. In the final stretch of the first round, the Kyrgyzstan applied a brutal sequence of blows, which knocked down the Brazilian. When Rafael went for more punches on the ground and to finish the fight, the referee decided to stop the action. This generated controversy for a possible hasty stoppage. With that decision, Fiziev was declared winner via technical knockout and notched his third consecutive victory for the promotion.

Deiveson Figueiredo vs Brandon Moreno ended in a majority draw