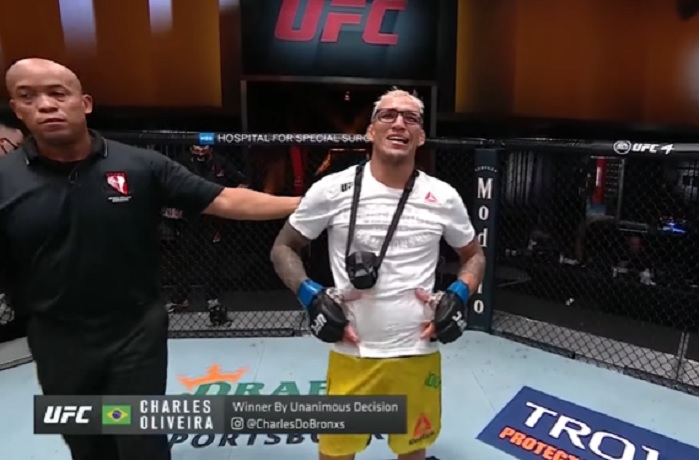 If anyone had any doubts about Charles Oliveira‘s  ability to be among the top, in the UFC lightweight division, the Brazilian answered inside the octagon. Last Saturday (12th), at UFC 256 in the co-main event, the Chute Boxe athlete had a dominating performance over Tony Ferguson, winning via unanimous decision. With the result, Oliveira scores his eighth consecutive victory with the promotion and, in his view, becomes the main contender for the title.

Khabib Nurmagomedov, continues to be the linear champion at lightweight, however, the Russian announced his retirement and it is not yet known if “The Eagle” will maintain his decision. Thus, Charles places himself as a challenger for the belt and in the eventual case of a vacant title challenge, he stressed that he will wait for the winner between Conor McGregor and Dustin Poirier, which will happen on January 23rd.

“Khabib swore before his father’s grave (that he would not fight again), so I think he is not kidding. Everyone knows, I won this fight (against Tony Ferguson), so I’m the next challenger and now I’m going to wait for the fight between Conor McGregor and Dustin Poirier. I have eight victories, I show up and make things happen, I finish or I knock out. Against Ferguson, I did what I wanted in that fight. I’m the next challenger for the belt, in 2021 I’ll be the first challenger. I’m going to watch McGregor x Poirier from a VIP box to see who my opponent for the belt will be ”, projected Oliveira, in an interview with ESPN America, only to immediately follow on and praise his performance against Ferguson.

“We came up with a strategy set up. We knew it would be difficult to finish, but I wanted to win, I wanted to shock the world and I think that’s what we did. We won the three rounds clearly, both in the stand up and on the ground, everyone saw it and everyone knows I was the better fighter. Ferguson came from 12 consecutive victories, he only lost to Justin Gaethje, but nobody did what I did here today (last Saturday). The fight went where I wanted it too, we did a little of everything. I took this fight with only 20 days notice, we set a strategy and came ready for it. ”, he concluded.

Deiveson Figueiredo vs Brandon Moreno ended in a majority draw