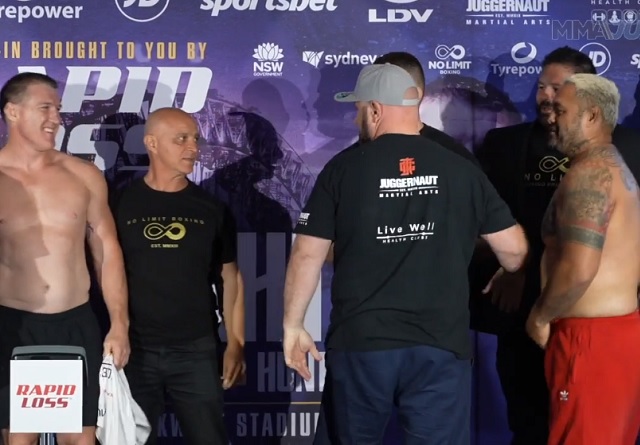 After making his mark on the UFC and PRIDE, veteran Mark Hunt, aged 46, will participate in a boxing match this Wednesday (16th), in Sydney, Australia. And during the face off for this fight against Paul Gallen, a former Rugby player, the “Super Samoan” tried to punch his opponent in the face – which just missed. The two, it is worth mentioning, were already exchanging words, during the press conference.

The images hit the internet on Tuesday (15th) and further increased the interest in the fight. Hunt will make his return to combat sports after two years. The heavyweight’s last performance was in December 2018, when he lost to Justin Willis and subsequently, left the UFC.

Paul Gallen, on the other hand, played for Cronulla-Sutherland Sharks, a rugby team from Australia, and at 39, has been focusing his career in professional boxer. Paul’s records reds, nine wins and a draw.

Check out the confusion in the face off:

Yo they’re just about to punch on at the weigh ins pic.twitter.com/j4taZmFxGH

Mark Hunt has just thrown a punch at Paul Gallen at the weigh-in. Hunt very annoyed by Gallen’s talk pic.twitter.com/EpHbYh6dXz