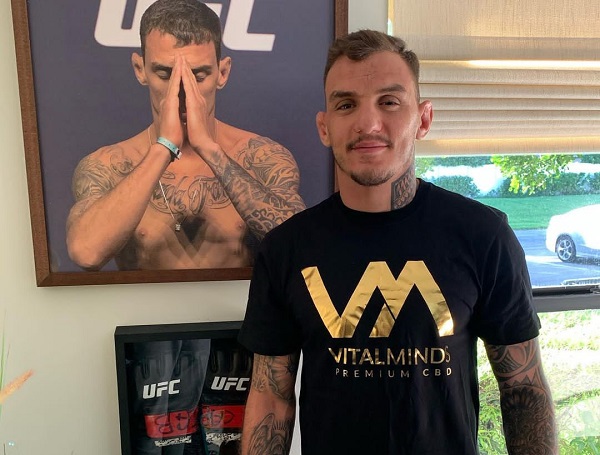 * After debuting in the lightweight division with a lightning victory – in just 44 seconds – submitting Damir Hadzovic at the UFC Brasília card in March, Renato Moicano is ready for another challenge. Next Saturday (12th), the Brazilian will face Rafael Fiziev, from Kyrgyzstan, at UFC 256, which will take place in Las Vegas. Moicano, who is fourth place in the ranking of the feather division, now wants to write his name in the ranking for the lightweight division.

For the confrontation against Fiziev, who comes from two consecutive victories and only one loss in his career, Moicano has been doing his camp at the renowned American Top Team, known for having high level coaches and outstanding athletes, including UFC champions. In addition, Renato had a contact with Marcus Buchecha, 13 times world champion of Jiu-Jitsu, who has been migrating to MMA and will fight at ONE Championship. In an interview with TATAME, Renato Moicano talks about how the experience of absorbing some knowledge from the Jiu-Jitsu multi-champion.

“I went to a seminar and learned amazing things, he is a phenomenal guy who has the traits of a champion, he has the humility to learn. I have had contact with some extraordinary fighters, such as Amanda Nunes, Junior Cigano, Rani Yahya, Dustin Poirier, Marlon Moraes, Edson Barboza. Their main attribute is humility, and Buchecha was no different. I learned a lot from his advice and I am very honoured to absorb advice and knowledge from such incredible people ”, said the fighter.

– Were you satisfied with the matchup against Rafael Fiziev?

I am always satisfied with what the match makers decide. He is a tough opponent and on my part, I have nothing to complain about. I will be ready to face whomever the UFC chooses. We know that nowadays, in the UFC, there is no easy fighters, small detail can cost you the fight, just as the smallest details can win the fight. In the UFC has the best and now we are heading for another challenge, but later on, I want to face athletes who are ranked in the division.

The camp was very good, I’m training with excellent athletes from American Top Team, with fighters who have the characteristics of my opponent. I’m focusing on Boxing, since my opponent is a striker. Let’s go, it’s a good fight, with a great opponent and my camp is being done in a very specific way, working on the characteristics that we want to use in the fight. I’m leaving everything in the gym, working hard to get ready for this fight.

– In general, how do you see your opponent’s game?

He’s a guy with good knockout power, but I don’t think he’s only weapon. His main threat, is that he is very good at Muay Thai, he knows how to pace the fight very well and has many decision victories, precisely because he knows how to control a fight. This is worse than facing a guy with knockout power. We saw Brian Ortega’s fight with the Korean Zombie, I already fought with both. Zombie is knockout, but Ortega is a guy who can pace the fight better in a decision, and it’s hard to beat a guy who fights like that. Fiziev is a very complete, difficult guy, but he is an opponent that I have full confidence that I can win with a good performance.

I didn’t have much contact, but I went to a seminar and learned amazing things, he is a phenomenal guy who has the traits of a champion, he has the humility to learn. I have had contact with some extraordinary fighters, such as Amanda Nunes, Junior Cigano, Rani Yahya, Dustin Poirier, Marlon Moraes, Edson Barboza. Their main attribute is humility, and Buchecha was no different. I learned a lot from his advice and I am very honoured to absorb advice and knowledge from such incredible people.

– Confidence in the next steps in the lightweight division

This fight against Fiziev and God willing, the victory, will show my potential within the division. The UFC already knows my worth, I got to the Top 4 at featherweight and now I want to be champion at lightweight, I’m prepared for it and feeling good, strong and complete. I want to impose my game plan, win the fight and show that I’m ready to fight the best in the division, I’m here to stay and I’m going to make some noise at lightweight, you can be sure of that.

Lightweight: Tony Ferguson vs. Charles of the Bronx

Welterweight: Li Jingliang vs Opponent to be defined