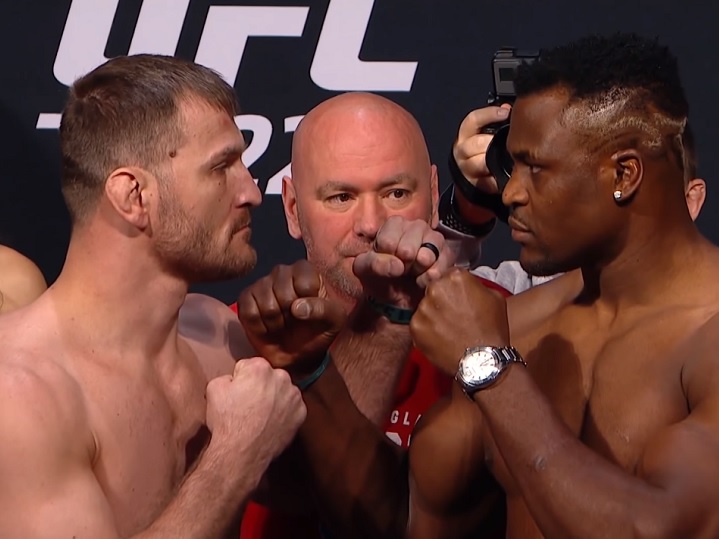 Miocic and Ngannou will have a rematch on March 27, at UFC 260 (Photo reproduction YouTube UFC)

Long awaited by MMA fans, the UFC is close to booking the rematch between, heavyweight champion Stipe Miocic and Francis Ngannou. At a press conference last Saturday (16), after UFC Fight Island 7, President Dana White confirmed his plans to make the fight the main event of UFC 260, in March 27. According to the big boss, only some “last details” are missing for the official announcement.

In the first meeting between them, in 2018, also for the title, it was Miocic who won by unanimous decision.Then, the Cameroonian lost to Derrick Lewis, but he recovered and put together a sequence of four straight victories – all by knockout in the first round. In the past 16 months, Ngannou has only fought once, knocking out Jairzinho Rozenstruik in 20 seconds, in May, at the UFC 249 main card.

Miocic went into action for the last time last August, when he ended his trilogy with Daniel Cormier, with an unanimous decision victory. Champion since 2016, Stipe lost the title to “DC” in 2018, since then he had a series of three fights in two years with the former champion. Having two victories and one loss, during that span.

Volkanovski vs. Ortega in the co-main event

Current UFC featherweight champion Alexander Volkanovski has his next appointment set by the promotion, according to the ESPN. The Australian will defend his title on March 27th, against Brian Ortega, at UFC 260. In principle, the idea is fro the fight to be the co-main event, ahead of the rematch between Stipe Miocic and Francis Ngannou.

The owner of 22 wins and only one defeat, Volkanovski, 32, won his last 19 fights, including two against Max Holloway, when he won the title in 2019 and successfully defended its in July 2020. Three years younger, Ortega comes from a victory over Chan Sung Jung – the Korean Zombie – in October, and will participate in his second title shot. In 2018, lost to Hollway, the champion at the time. Ortega has 15 victories and 1 loss in his career.