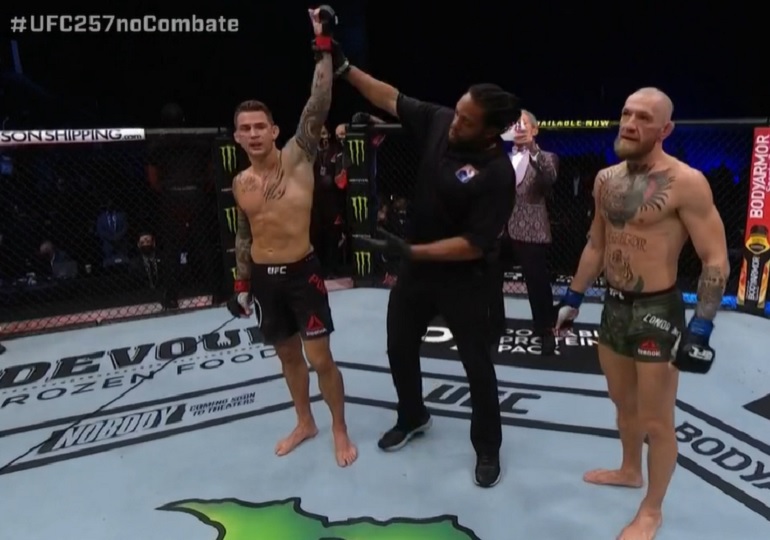 The UFC just ended its most recent stint on Fight Island in Abu Dhabi (UAE). UFC 257, this Saturday (23rd), marked the return of Conor McGregor to the octagon after a year, but the man who stole the show, was his opponent, Dustin Poirier. In a fight that was highlighted by a big come from behind win, the American shocked the MMA world by knocking out the Irishman in the second round, after a spectacular combinations of strikes. In the evening’s co-main event, Michael Chandler had a “perfect” debut for the promtion. The former Bellator lightweight champion, put on a real show against Dan Hooker and knocked out the New Zealander in the first round, putting his name on the top of the under 70kg division.

On the main card, Marina Rodriguez and Amanda Ribas faced each other, with Marina coming out the winner, by knockout in the second round. In the preliminary card, after spending 2020 without a fight, Antônio Caros Jr returned, but ended up on the losing to Brad Tavares by unanimous decision.

Poirier knocks out McGregor and shocks the MMA world

As expected, Conor McGregor and Dustin Poirierstarted at a high pace. Poirier, was strategic and timed his takedown perfectly, with the Irishman managing to get to the cage and quickly back on his feet. The fight remained up against the cage, with an emphasis on the “shoulder” attacks from Conor. In the last seconds, with the fight back in the center of the octagon, Conor hit him with some good strikes at the middle distance and just got the advantage in the first round.

The former double champion continued to press at the start pf the second round, using his famous left hooks. But McGregor was not expecting the impressive comeback by Dustin. “Diamond” increased the pace, taking advantage of a brief laps in concentration form his opponent, moved forward on McGregor and applied a great combination with one of the left shots, rocking Conor. Poirier, sensing that victory was close, went in to finish the job, with a last shot from the right, knocking out the Irish star and forcing referee Herb Dean to stop the contest. It was Dustin Poirier’s second straight win, while Conor McGregor suffered the first knockout in his MMA career.

From the first seconds of the fight, Michael Chandler showed his strategy: shorten the distance to hit Dan Hooker. After a few minutes, the former Bellator lightweight champion, took the initiative and attacked the New Zealander and in a sequence he landed a good left handed strike, which took Hooker to the canvas. Chandler fired a series of punches that prompted the referee to stop the confrontation, decreeing Chandler the winning by knockout in the first round. Nice calling card for Michael Chandler on his arrival to the UFC.

After a studied start to the fight, Amanda Ribas shortened the distance and, with a lot of technique, managed to take Marina Rodriguez down. On top, Amanda used some good ground and pound, despite Marina’s good movement from below. Ribas was clearly superior in the first round.

In the second round, Marina started moving forward using her striking and in the first seconds, connected a sequence of right-hand strikes, that swayed Ribas. Undecided, referee Herd Dean suggested he was going to stop the fight, which led Marina Rodriguez to even celebrate. However, the fight continued, with Marina needing just a few more strikes for the referee, to finally stop the fight, declaring Rodriguez the winner. With the result, Rodriguez recovers from her loss to Carla Esparza, while Amanda suffered her first setback for the promotion after four victories in a row.

After a balanced start to the fight, Antônio Carlos Jr was the first to attempt a takedown, which was well defended by Brad Tavares twice. In the second round, the Brazilian continued looking for the ground, but the Hawaiian proved his takedown defence was in good shape and kept the fight standing, where he had the clear advantage. In the final stretch of the round, the Brazilian was knocked down from a hard right hand shot.

Tavares was clearly superior in the stand up in the third and last round, applying good low kicks and accurate strikes at middle distance. Carlos Jr continued to try and take the Hawaiian down, but Brad continued with his fantastic takedown defense. Eventually winning by unanimous decision, recovering from the two defeats. The Brazilian, on the other hand, saw his third consecutive defeat.

Dustin Poirier defeated Conor McGregor via knockout in the R2