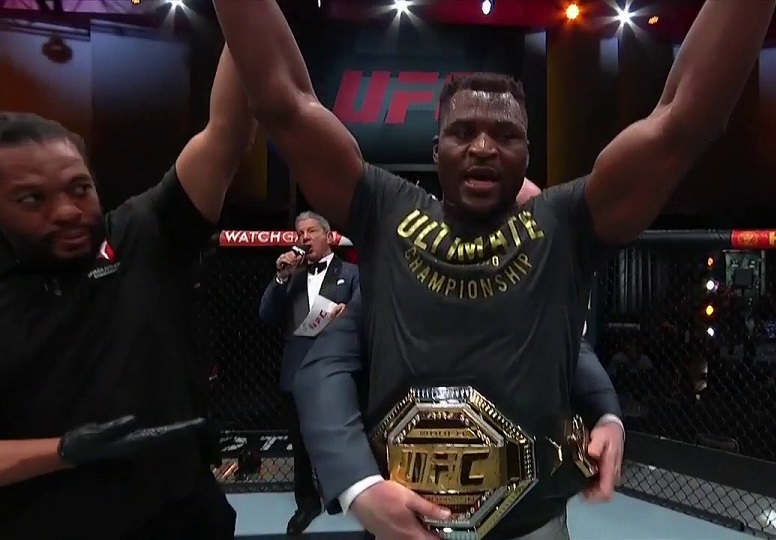 The heavyweight division of the UFC, met on Saturday (27) a new champion. In the main event of UFC 260, held in Las Vegas (USA), Francis Ngannou put on a real show and, without giving chances to the then title holder, Stipe Miocic, won by knockout in the second round and is now the king of the division. In addition, the Cameroonian became the first African heavyweight champion in the organization’s history.

In the edition’s co-main event, Vicente Luque also shone. In fight against former champion Tyron Woodley, the Brazilian won in the first round, after showing a lot of Jiu-Jitsu technique and submitting his opponent with a hand triangle. Thominhas Almeida was another athlete to represent Brazil on the card, however, the paulista, despite being resistant, ended up being knocked out by the American Sean O’Malley in the third round.

Challenging for the title, Francis Ngannou was more aggressive at the start of the fight, with two good strikes in a row against Stipe Miocic. The champion immediately attempted a takedown, but saw the Cameroonian defend and invert the position, applying yet another sequence of powerful blows via ground and pound, which cemented Ngannou’s superiority in the first round.

In the second round, Francis returned even more offensive. A left-handed cross caught Miocic’s chin straight, who was knocked down. The Cameroonian saw his opponent get up and then hit him with another very strong left handed blow, this one “fatal”, making Miocic fall to the canvas, which made referee Herb Dean intervene immediately. Now holding the heavyweight belt, the Cameroonian scored his fifth straight win in the organization, while the American, who holds the record for title defenses in the division, loses after two straight wins over Daniel Cormier.

Luque submits Woodley and wins the third in a row

In the first seconds, Tyron Woodley looked for the clinch, in an attempt to takedown Vicente Luque, who showed good defense and pressed the American against the cage. After a few moments of grappling, the former champion went up and connected two good right handed strikes and Vicente felt it, but he did not retreat and returned with a right overhand, which triggered yet another strong sequence of punches, which led Woodley to the floor. Luque, then, using his patience and, seeing the opponent practically finished, wrapped the neck of the American and fitted a beautiful hand in triangle, forcing Tyron to tap. With that, the Brasiliense hitched his third win in a row, while Woodley suffered the fourth setback in a row.

With greater reach, Sean O’Malley started the fight with a good volume of strikes, while Thominhas Almeidaresponded with a good left cross. In the sequence, the Brazilian took a hard high kick and got knocked down, but recovered. Until the end of the first round, the American still hit two more good kicks and rocked the paulista again. The second round had a more balanced start, with both betting more on kicks. Dominating the center of the cage and again with more strokes connected in relation to Thominhas, O’Malley was slightly superior.

Aware that he was better in the previous rounds, Sean O’Malley had a more controlled performance in the third and last round, while Thominhas Almeida tried a “last gas” effort, but he was hit again by the American and went to the ground, still receiving strong ground and pound, forcing the referee’s interruption. With that, Sean recovered from the defeat suffered by Marlon Vera and won again, while the Brazilian suffered his fourth consecutive defeat.

The preliminary card, as well as the main card, featured five matches in all. One of the highlights was light heavyweight Alonzo Menifield, who still in the first round, applied a rare Von Flue Choke and forced Fabio Cherant to tap. Who also performed well was Marc-André Barriault, who in an agitated fight against Abu Azaitar, won by technical knockout in the last seconds of the third round.