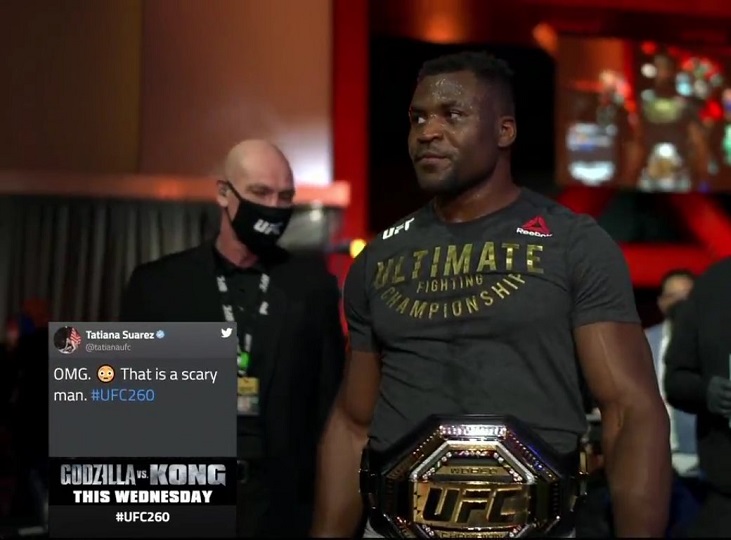 UFC 260, held Saturday (27), in Las Vegas (USA), was marked by some great fights for MMA fans. These mainly happened on the main card, and this was reflected in the awards given by the promotion. The new heavyweight champion, after defeating Stipe Miocic in the main event, Francis Ngannou won the “Performance of the Night” bonus, as did Sean O’Malley, who overcame Thominhas Almeida. Winner in the co-main event, Vicente Luque won the “Fight of the Night” in battle against Tyron Woodley. Thus, Ngannou, O’Malley, Luque and Woodley each made 50 thousand dollars.

Defeated by Stipe Miocic in 2018, Francis Ngannou had a second chance in this rematch and didn’t waste his opportunity. Superior from the star of the fight, the Cameroonian did not give the American any chance and won by knockout in the second round, after applying two very strong left-handed strikes, which forced referee Herb Dean to intervene. Who also won via a knockout was Sean O’Malley. In action on the main card, the American was vastly superior to the Brazilian Thominhas Almeida and managed the win in the third round.

In the co-main event, Vicente Luque withstood the initial pressure from Tyron Woodley and showed technique and calm to overcome the former welterweight champion. The Brazilian landed some good strikes in the stand up, which knocked down the American, and remaining calm, he made use of his Jiu-Jitsu, finishing with a hand in triangle in the first round. With the result, Luque scores his third straight win for the UFC.