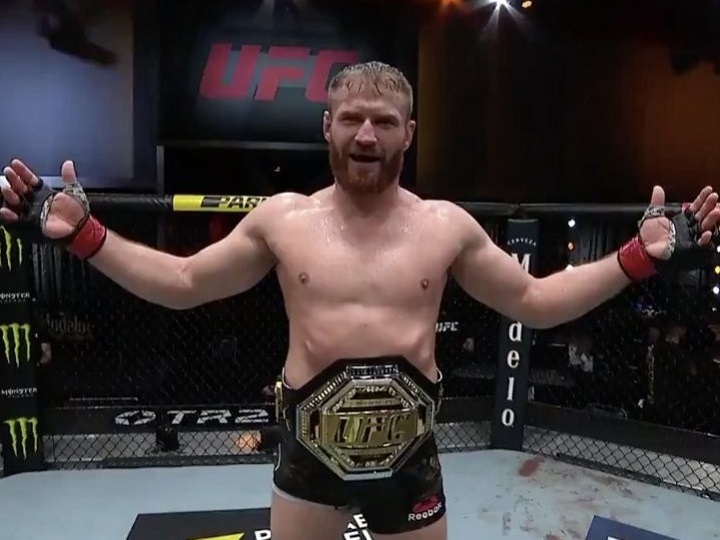 On Saturday (6), in Las Vegas (EUA), UFC 259 was historic indeed. Amid many great fights, Jan Blachowicz won Israel Adesanya via unanimous decision. With this result, Blachowicz is still the middleweight champ and Adesanya lost for the first time in MMA. In the co-main event, Amanda Nunes stood out, submitted Megan Anderson in R1 and remained featherweight champion. Aljamain Sterling was the new bantamweight champion after Petr Yan hitting an illegal kick and being disqualified.

Still in the main card, Thiago ‘Marreta’ Santos was defeated by Aleksandar Rakic via unanimous decision. In the Undercard, Rogério Bontorin was knocked out by Kai Kara-France, while Amanda Lemos knocked out Livinha Souza.

Blachowicz remains the champion and Adesanya loses for the first time

Israel Adesanya started well, controlling the distance over Jan Blachowicz. In round 2, the middleweight champion kept his strategy but the Polish fighter managed to evolve during the fight. In R3, Blachowicz was more confident and attacked Adesanya.

Jan Blachowicz started R4 better and took the fight to the ground and pound. In R5, the last one, both fighters chose to attack, and Blachowicz took Adesanya down and controlled the rest of the fight, wisely. After five rounds, Blachowicz won by unanimous decision and remained the middleweight champion. Israel Adesanya lost for the first time in MMA after 20 wins.

Like everyone expected, Amanda Nunes started with caution since Megan Anderson has a deeper reach. But when Nunes had a chance, she attacked leading Anderson to the ground. Once on the ground, the Brazilian went to Anderson’s back and submitted via armlock. Double champ, “The Lioness” remained the UFC featherweight champ.

Sterling won after Yan was disqualified

Surprisingly, Aljamain Sterling started attacking with effective kicks over Petr Yan, with a knee that hit the face of the champ. In the second round, Sterling tried to takedown Yan, but it was defended.

The third round was even, but the Russian used a lot of takedowns. In R4, Sterling seemed tired while Petr Yan kept growing in the fight. At the end, the Russian used an illegal kick and hit Sterling’s head. The physician examined the fighter and said he had no physical condition to keep fighting. Then, the referee disqualified Petr Yan. That was the first time the belt went to the other fighter due to disqualification in the history of the UFC.

Thiago Santos loses for the third time in a row

Thiago Santos and Aleksandar Rakic started the fight with kicks but very little efficiency. In the second round Rakic pushed Santos against the fence. Rakic then went for the clinch, but the Brazilian managed to escape and came back to the fight.

Thiago Santos kicked more in the third and last round while Rakic kept trying to push the Brazilian against the fence. The fight was mild and the judges decided to give the victory to  Aleksandar Rakic. With this fight Santos lost for the third time a row in the UFC.

Rogério Bontorin is knocked out

After a slow start, Rogério Bontorin was the first to attack, in the middle of the first round, and took Kai Kara-France down. Bontorin used his Jiu-Jitsu and even tried a RNC, but Kara-France defended himself.

With the standing fight, Kara-France knocked Bontorin down with a right blow. The referee noticed the Brazilian was out and stopped the fight. Kai Kara-France won again (he lost the previous fight) while Bontorin lost for the second time in a row.

Amanda Lemos knocks out Livinha and wins for the third time

Amanda Lemos started attacking Livinha Souza against the fence, with connected kicks. Then, Amanda knocked down Livinha  with a right blow and stayed on top with ground and pound. After the fight came back to a standing position Lemos knocked down again and went for the ground and pound, but then the referee stopped the fight. With this win via TKO in the first round, Amanda Lemos conquered her third victory in a row in the promotion.