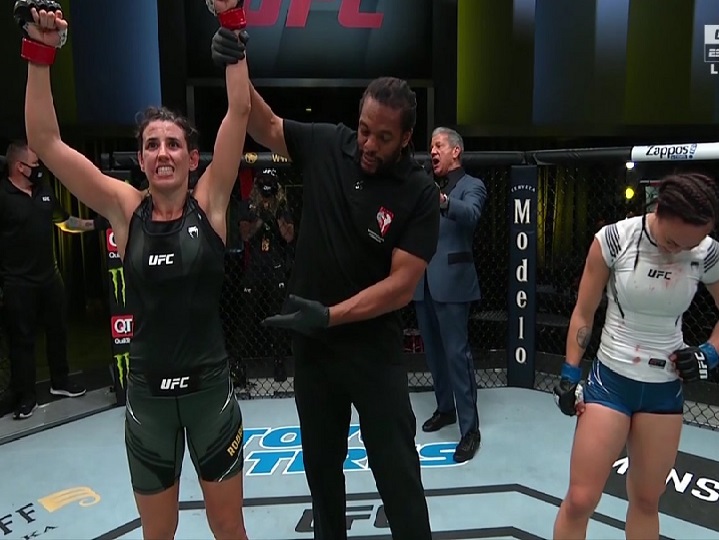 Last Saturday (8), in Las Vegas (USA), UFC Vegas 26 marked the “last act” of Marina Rodriguez’ saga. The Brazilian fighter accepted the fight with only a few days from the event and defeated Michelle Waterson by unanimous decision. In the co-main event, Alex Morono defeated veteran Donald Cerrone by knockout in the first round.

Besides Rodriguez, two other Brazilians fought in the main card. Marcos Pezão Lima gave no chances to Maurice Greene and won by decision of the judges. In the lightweight, Diego Ferreira started well but was knocked out by Gregor Gillespie in round 2.

A few hours from the start of the event, the promotion announced Amanda Ribas vs Angela Hill, which would happen in the main card, in the women’s strawweight, had been cancelled. Ribas had tested positive for Covid-19 on Saturday (8), like her teammates. On social media, Ribas said that was the second time she got infected.

“I tested positive for Covid but it may be a false positive. The promotion decided to cancel the fight. God controls it all. I will fight! Just don’t know when, but I will! PS: I had Covid before,” she posted.

After studying each other’s moves, Michelle Waterson striked first but Marina Rodriguez defended. Waterson, then, started to bet on low kicks but Rodriguez won the first round clearly. In the second round, Rodriguez pressured Waterson against the fence using hard blows.

In the third round, the Brazilian athlete hit hard the american who almost fell. With a tight Muay Thai, Marina Rodriguez followed the fourth and fifth rounds striking and defending effectively. Due to that, Rodriguez was declared the winner by unanimous decision and got closer to the strawweight title shot.

Cerrone is knocked out and loses again

The first round of Donald Cerrone vs Alex Morono was pretty even, with a good standing fight performance. By the end of R1, Morono striked Cerrone hard and, as the “Cowboy” showed no resistance, the referee stopped the fight. With this result, Cerrone lost for the fifth time in six fights while “The Great White” recovered from losing to Anthony Pettis.

Maurice Greene and Marcos Pezão Lima started with an intense pace and Lima seeked the ground and pound. In the second round, Lima took Greene down and dominated once again the fight on the ground.

The third round repeated the script of the previous ones and the judges declared Marcos Lima the winner. With this result, the Brazilian heavyweight recovered from losing to Alexander Romanov.

Diego Ferreira is knocked out by American

In the beginning both fighters attacked with intense blows in an even bout. Carlos Diego Ferreira striked effectively and Gregor Gillespie seeked the ground to dominate the fight. But Ferreira has a tight Jiu-Jitsu technique and almost submitted with a RNC.

In the second round, Gillespie improved his grappling game and hit hard in the ground and pound. Carlos Diego wasn’t able to resist and the referee stopped the fight. With the victory, Gregor Gillespie recovers from losing to Kevin Lee, while Ferreira loses for the second time in a row.