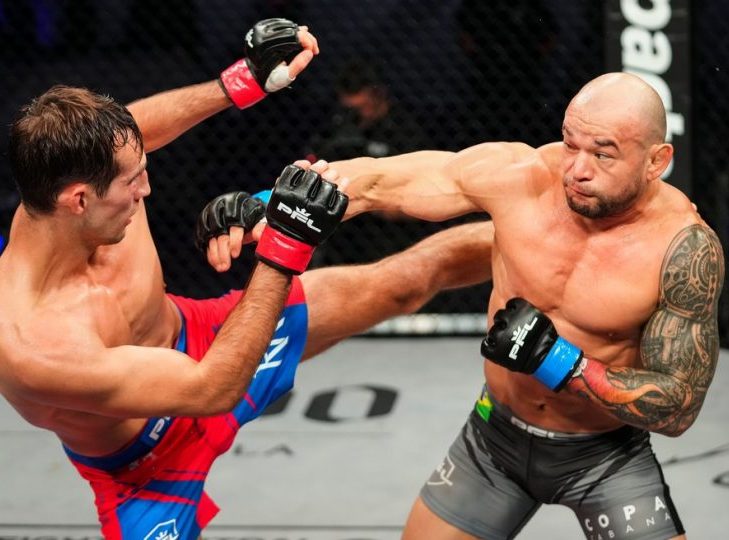 Gleison Tibau said he would knock out Rory MacDonald in a rematch (Photo: Cooper Neill / PFL)

Last June 17 at PFL 5, Gleison Tibau vs Rory MacDonald ended in controversy. After three rounds, Tibau won by split decision and MacDonald didn’t agree at all with the judges. He claimed it was a wrong judgment.

After his first victory in the Professional Fighters League, Gleison Tibau talked about Rory MacDonald’s statements and, in an interview to MMA Fighting, said he couldn’t see a way the Canadian fighter could have won. Besides, Tibau revealed he had injured his biceps and almost refused the fight against MacDonald.

“I was comfortable fighting and I thought I could have done more. I have the tools to do it but I slowed it down. It was tough but we made it. He is a legend in Canada. It is normal the country protects him. But, watching the fight, I can’t see him as the winner. I hit him effectively. I can’t see a different result for that fight,” the Brazilian said.

However, Rory MacDonald was classified for the semifinals while Gleison Tibau could get enough points to go on. At least, Ray Sefo – the president of PFL – promised Tibau (37) a fight in the next season. Besides, Tibau will face Sadibou Sy in a fight that is not part of the GP at PFL 8, August 19.

In the PFL welterweight semifinals, Rory MacDonald will fight Ray Cooper III, while João Zeferino faces Magomed Magomedkerimov. If Tibau wins against Sadibou Sy, he can fight in the final if one of the fighters gets injured. And, in a possible rematch against MacDonald, Tibau thinks the fight may be different.

“Next time I will knock him out. I know the way. I felt I could have knocked him out. He wouldn’t take the pressure if we had fought five rounds. He wanted the fight to end, I felt that,” he said.