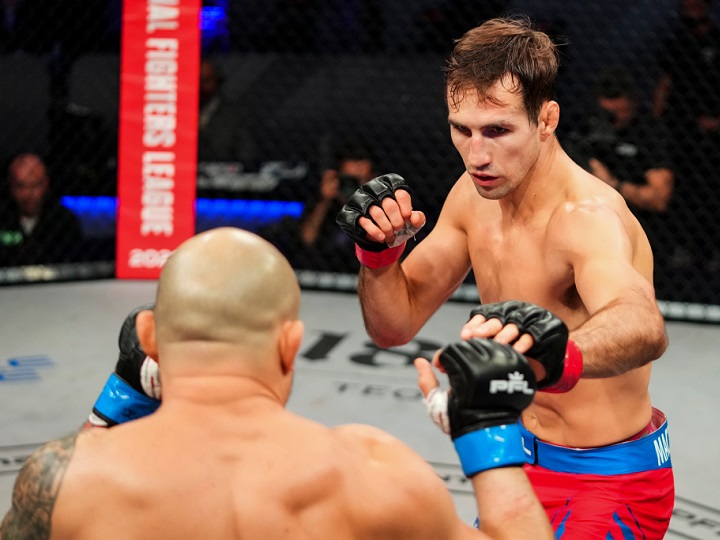 Rory MacDonald and Gleison Tibau in a welterweight fight during PFL 5 at the Ocean Casino Resort (Photo: Cooper Neill / PFL)

At PFL #5 (Professional Fighters League) in the 2021 season, last Thursday (17), in New Jersey (USA), Rory MacDonald was classified for the welterweight semifinals but wasn’t happy about it. Beaten by Gleison Tibau via unanimous decision, the Canadian didn’t accept losing against Tibau. He criticized the event and the judges. Then, Rory asked for an investigation claiming he was “robbed”.

“I am very disappointed. I believe – and everyone I have spoken to – that I won the fight. Many saw 30-27 for my side. It was clearly a robbery. I dominated every moment of that tough fight. Gleison made it harder, I respect him, but I am sure I won. I think they should investigate it,” MacDonald said.

Rory MacDonald was so certain about winning that he couldn’t disguise his deception when Gleison Tibau was declared the champion. MacDonald (31) even hoped for a unanimous decision in his favor, but that didn’t happen.

“I was sure I had won. I was so surprised when the first judge they announced scored it for him. I was shocked, but when I heard the split decision that he got I was just blown away. I mean, what do you say? I just didn’t see it that way at all. We shouldn’t have to as fighters, as competitors,” said MacDonald. “We should be able to fight and rest easy knowing that we have competent, fair [and] truthful judgement in our sport. It shouldn’t be something we have to worry about and stick our necks out on the line and our health to do something stupid. It’s just crazy. We don’t have this in any other major sporting event,” MacDonald continued. “It just seems like over and over and over again we’re getting this in our sport and it’s just a real shame,” MacDonald stated.