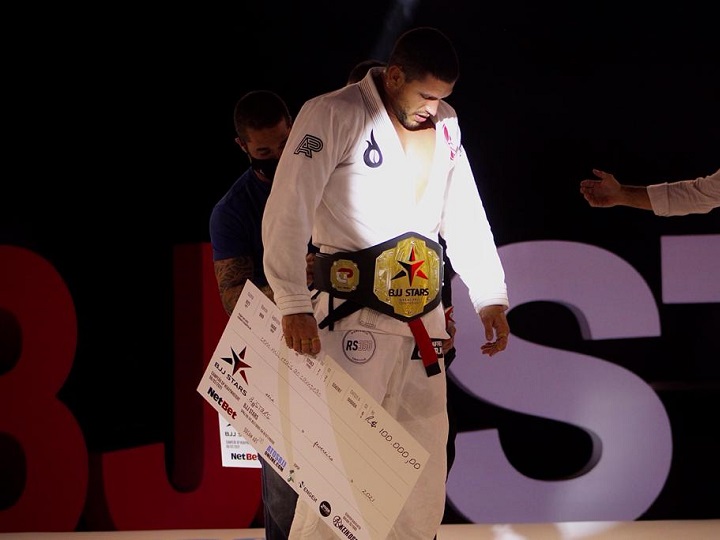 * Heavyweight GP BJJ Stars champion in February, Felipe Pena is ready for his next challenge. Next Saturday (26), at BJJ Stars 6, he will defend his title against Patrick Gaudio, in the main event. The show will also feature the finals of the reality show “The New Star”.

There is a big expectation about this fight between “old friends” who have fought other times. In an interview to TATAME, Pena talked about he expects from this fight against Gaudio. However, Pena said that he has prepared a lot for this fight and it will be amazing for the fans.

“I believe this fight is going to be a war. I have fought Patrick Gaudio many times, but he has evolved a lot. He is coming from a victory at the AJP South America Continental Pro. But I am ready. I have no injuries and I am confident,” Pena said.

Felipe Pena talked about “The New Star”, a BJJ reality show promoter by BJJ Stars, and a possible fight against Gordon Ryan.

– Compliments to the reality show The New Star

I thought the reality show was pretty amazing. Of course it can be improved but BJJ Stars has done a lot by promoting this. I think it is great and it is a start. From what I have seen and talked about, the promoters are thrilled with what is coming next. So I am thankful for have been part of it. It has been better than I imagined. I am looking forward to the next chapters of this show.

– How do you rate your career regarding championships?

Right now the only title that I still don’t have is the BJJ world open weight. So, I have to be really motivated to fight. I have to train hard to be 100% ready. My main goal is the world open weight but I believe I will get there this year.

Talking about super fights, I can think of Nicholas Meregali and Kaynan Duarte. They are strong athletes and that would be challenging. I have news about one of them but it will be announced soon. I would like to fight Roberto Cyborg and Mahamed Aly too. I have never fought any of them, so I think it would be interesting. And I guess fans would like it too.

This is something that is happening naturally here at the gym. I am still very focused in being an athlete but I teach too. We have a strong team here. Caio BB has been standing out but we have others. We have a full preparation so people can evolve in Jiu-Jitsu. Each year we get stronger. I am glad but not satisfied. There is a lot to happen yet.

– About Gordon Ryan and a possible fight

I think it is important to talk about this because some people believe in his words. You can ask BJJ Stars, BJJBET, Third Coast Grappling, or even FloGrappling, that loves him. I have sent them messages but he doesn’t want to fight. I am open to the idea. Eventhough I have beaten him twice. He says that he has evolved a lot, that he would beat me easily but I don’t know why he doesn’t want to fight me.